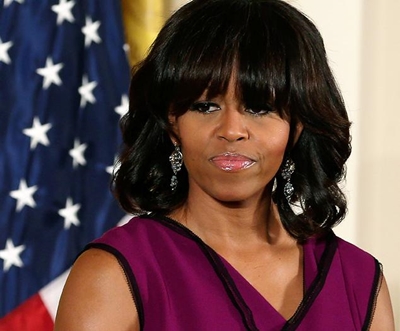 A lot has been said about Michelle Obama´s style, in fact the media is more focussed on her sense of style rather than her actual achievements or educational background. I admire her because she´s well-educated, smart, and has a great sense of style. She´s one of the only four US first ladies who earned a graduate degree, and from Harvard Law School!

Michelle is known for her attainable and affordable fashion. She´s created elegant do-it-yourself looks, mixing affordable and widely accessible items with high-end designers, mastering floral dresses, cardigans and belts. She also brought back to trend the elegant, pointed-toe kitten heels … probably because she doesn´t need more than a couple of inches of length or she´ll tower over the President.

Dubbed as Mrs. O the fashion icon, her effect on the fashion industry is estimated at around $2.7 billion in sales just by getting dressed. She´s said to be “the most casual first lady we’ve ever had” and the second most stylish after Jackie Kennedy. Here´s a look on how to get Michelle Obama´s style. 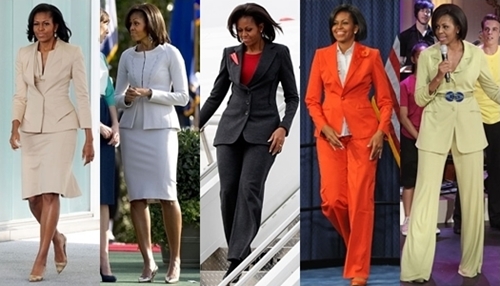 Whether she´s accompanying the President on some business affairs or if she´s keeping up with her own speaking engagements, she relies on the power of suits – skirt suit or pants suit. If she´s not keeping things muted with an all-nude or all-gray combo, she layers a red bright top under a black suit for a striking dose of color. And yet to some events, she goes for a bright monochrome suit. 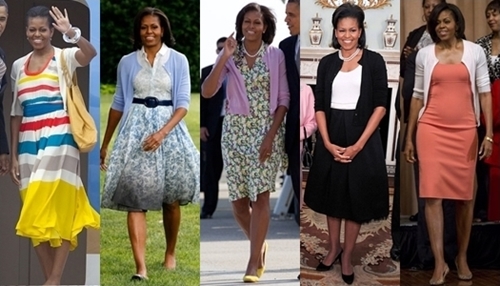 When we speak of cardigans, Michelle Obama is probably the first to come to your mind. No one´s polished a sweater look as effortless as she does. She´d layer a white cardigan on a colored striped maxi dress for a travel outfit, she´d complement a fit and flare dress with a matching cardigan, or she´d contrast a colored cardigan on a printed dress. She was also seen in a Michael Kors sleeveless double-faced sheath dress worn with a white cardigan during a visit at the United States Trade Representatives office in Washington. She can make a simple sweater look respectable.

She was highly criticized when she wore a black cardigan on a black and white outfit to meet Queen Elizabeth. Designer Oscar de la Renta, whose dresses were never seen worn by Michelle, commented against her outfit saying, “You don´t wear a sweater to meet the queen!” And yet who cares? She looked great! 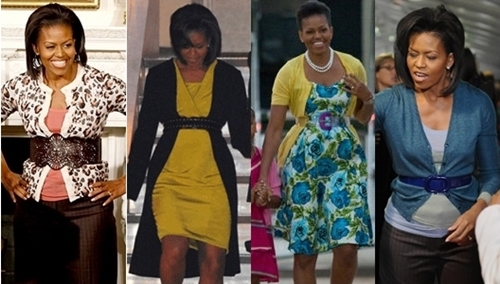 When she feels like flaunting her curves, she wears the belt over the cardigan for that perfect cinched waist. When mustard was a trend color, she wore a mustard sheath dress styled with a black long cardigan pulled together with a black belt. 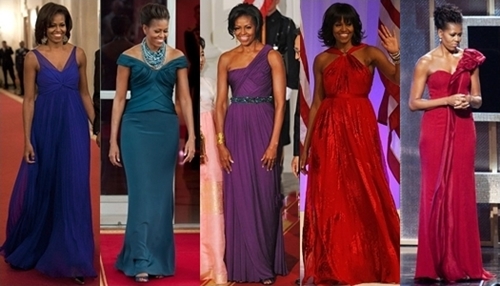 The moment Michelle Obama became the latest US first lady in 2008, she immediately gained the fashion community’s vote for her all-American style. So it´s not surprising that when it comes to evening dresses, she goes for gowns that are regal but nothing close to dresses that snob royals would wear. I mean, she´s being criticized for wearing evening gowns that shows too much skin – sleeveless or one-shoulder dresses that are similar to those worn by celebrities on the red carpet – but then wouldn´t critics will always be there no matter what she wears? 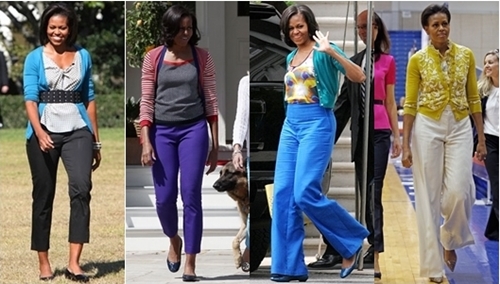 Because Michelle is tall with well-toned figure, she could easily pull off a pair of cropped pants. She´s always seen teaming them with pointed toe flats. When she goes sporty, she swaps the flats with sneakers. The first lady also has a preference for light, wide-legged trousers. She wears them with her fashion staple, cardigans – in cropped size – to balance the length of her pants. 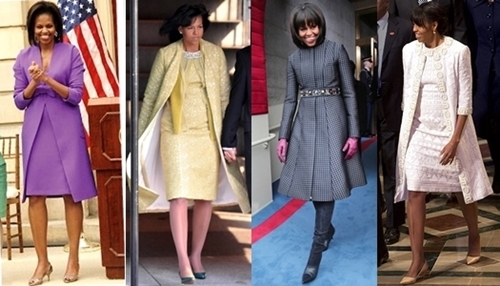 Michelle´s classy taste just becomes more evident as the weather turns chilly and she wraps herself with chic coats. She has loves clean-lined coats that hit around the knees combined with a matching dress or skirt. She looks chic and sophisticated just the same whether she opts for an airy neutral tone or bursting in color.

But her coat that garnered way more attention to date is the Thom Browne jacquard dress coat she wore at the swearing-in ceremony in January. She wore it open and with pumps during the day but in the evening when it turned colder, she completed the look with a J.Crew belt, Cathy Waterman necklace, and Reed Krakoff over the knee boots.

What do you think of Michelle Obama´s style?