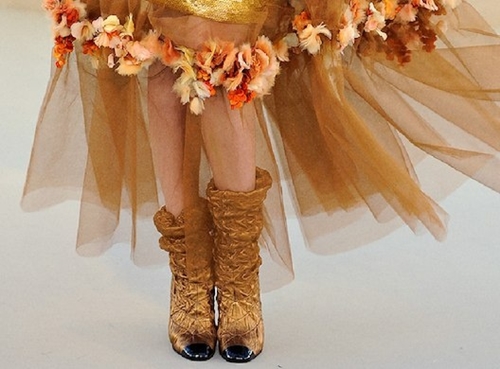 Couture boots are not your typical investment boots. They´re high fashion and are made of highest quality material with very luxurious designs. Although many women are not able to afford a pair of couture boots and some are wise enough to invest their money somewhere else, women of money are blessed to enjoy the lux and beauty of creative couture boots, easily. But if you´re like me who works hard for every penny and requires months if not a year worth of saving in order to purchase a pair of Alexander McQueen boots, then here are my two tips – start saving now and hunt for discounted couture boots.

Some of the couture boots I feature here are on sale while others, in spite of their elegance, are more affordable and reachable. The Viscose and cotton Missoni ankleboot is a re-interpretation of the famous style by the Italian brand. It´s a mix of beige and brown, girly and sophisticated. It´s pefect to wear with a neutral or multicolored mini dress. Featuring a strap with metal buckle at the ankle and black leather rib straps in front, this multicolored Velluto ankle boot is impeccably stylish. Its stiletto heel is feminine and since it´s not skyscraper high, it´s comfortable. Worn with a little black dress, a white dress, or any monochrome outfit, this couture boot will seriously do the talking. Personally my favorite, this black leather ankle boot by Gaspard Yurkievich is kind of overt couture. It does not immediately steal the show but once a glance is thrown on its direction, it charms you to look at it closely and see its beauty. It has crossed straps on the front of the ankle creating a tightening effect. Because it´s black, it literally goes with everything. Missoni goes creative with these lace-up boots featuring square-shaped heels. Its wavy pattern is a couture interpretation for the trending baroque style. It adds interesting detail to an outfit. When it comes to tall boots, there´s nothing as extravagant as this Nero-blue-prugna knee high couture boots by Missoni. The geometric prints and vibrant colors fancy every fashionista, who can have enough? A modern take on the gladiator ankle boots with evident baroque style, this python black sandals from Michael Kors is a gem. It´s both stylish and comfortable to wear. Worn with a dress, shorts or pants with rolled cuffs, this boot is as versatile as the Gaspard Yurkievich Leather Ankle Boots. When it´s time to boot it up with thigh high boots, nothing beats the glamor of a quality stretch leather that´s designed to perfectly mould to your calf size. Remember, in oder to not look cheal in thigh high boots, always go for clean styled designer couture boots. This low leather boot by Alexander McQueen is styled with square perforations and lace detailed edge. It also has metal pointed toe, almost like a cap toe. Because it´s beige, it works great in tempering overwhelming printed and patterned outfits. The best feature of this black and white ankle boot by Alexander McQueen is the tassel tongue in front secured with a buckled strap. If you want to get this look for less, I found the tutorial on how to fake the tongue in P.S. – I Made This. This couture boot offers that classic oxford elegance. A modern take of the ’80s must-have satin, these Azzaro low boots are made of satin with gorgeous black spots. Very intriguing, the upper with cut-outs barely covers the foot and leaves nothing to the imagination, thus make sure to wear sexy colored toe nails.

What do you think of these couture boots? Are you willing to spend for a pair of couture boots or would you rather opt for more affordable shoes?

What Boots to Wear this Season
Tropical Inspired Prints for Work Outfits
4 Tips on Styling a Pair of Converse Shoes
3 Celebrity Outfits: How Cameron Diaz Layers Up for Fall
Tweet
Pin8
Share3
11 Shares